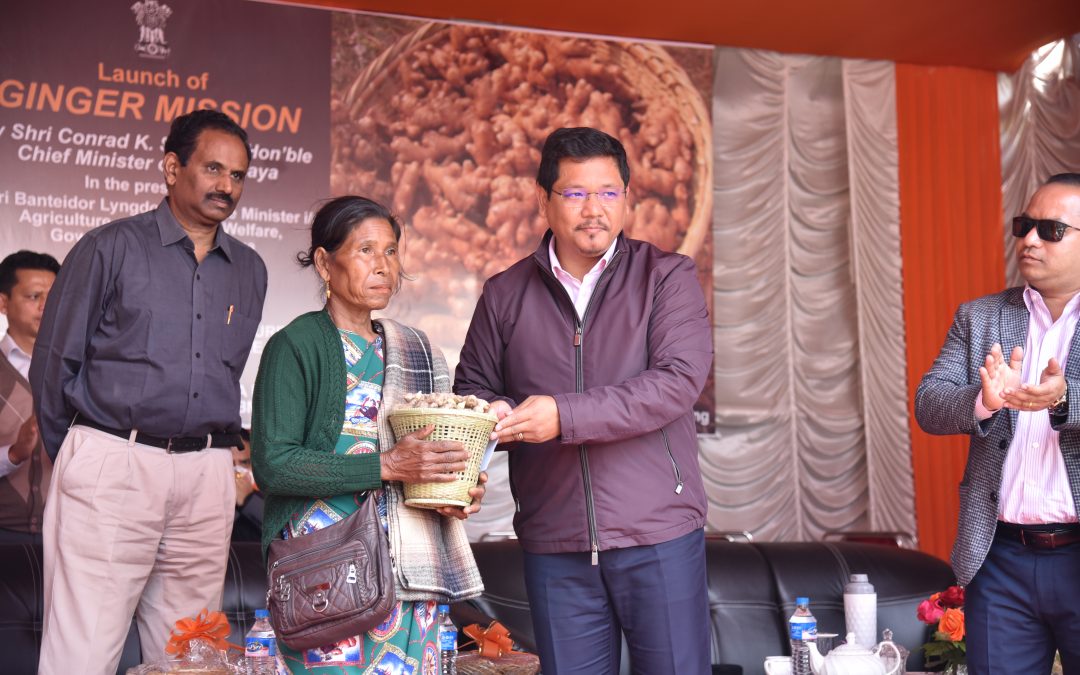 The mission aims to double the ginger production in the State to at least 1.5 lakh MT per annum in the next three years from its current production of about 60,000 MT per annum. Through the mission, the Department of Agriculture and Farmer’s Welfare will introduce improved and high yielding varieties of ginger like – IISR Mahima, IISR Varada and Nadia (which is currently being grown widely in the State).

Through the mission about 50,000 farmers will be benefited and the area of production will be increased from 10,000 ha to 12,500 ha. Apart from introducing high yielding and improved varieties of ginger, the mission imparts training to farmers on the Package of Practices (POP) and the latest production technology, collectivization and aggregation, processing of ginger and market linkage.

Speaking at the launching ceremony, the Chief Minister said that the objective of Ginger Mission was to improve the overall earnings of the farmers in the State.

He said that in the past several programmes for farmers welfare were introduced, however, the objective to enhance farmers’ earning was not achieved. “Through Ginger Mission and other flagship farmers programmes, the Government has designed a dedicated road map to ensure that farmers’ incomes were doubled,” he stressed.

Stating that the Government has been consistently working for the welfare of the farmers through different interventions, he said, “As Government we have realised that 70 percent of the population in the State are into farming and it is incumbent on us that we introduce initiatives that directly and indirectly enable our farmers to reap its benefit.”

He further informed that through Ginger Mission, the Government will create logistic hubs and storage spaces and as well as connect the farmers to bigger markets and buyers. “Government will ensure that all verticals related to introduction of improved seed varieties, training, production and marketing linkage are taken care of to ensure maximum output,” he added.

He also said that the indigenous variety “Sying Makhir” which is highly medicinal will also be promoted through this programme. “Our local variety of ginger Ing Makhir has medicinal properties and through this mission we will ensure its development and promotion”, he said.

He informed that ₹ 121 cr has been earmarked for the mission for a period of three years and by the end of the mission, the Government is confident that Meghalaya would become the third largest producer of ginger in the country.

It may be noted that the Government would be spending about ₹ 18 Crores in the first year to procure 2,200 MT on quality planting materials and will be distributed freely to about 9000 farmers this year covering about 400 Villages. About ₹ 6 Crores on Package of Practices, Training to farmers etc. 30 new processing units will be set up across the state at an estimated amount of ₹ 7.5 Crores. About ₹ 1 crores will be spent on Marketing for ginger, Creating packaging units to enable selling it to the final consumers etc.

During the launch, he also handed over the improved varieties of ginger samples to the farmers, who attended the programme.