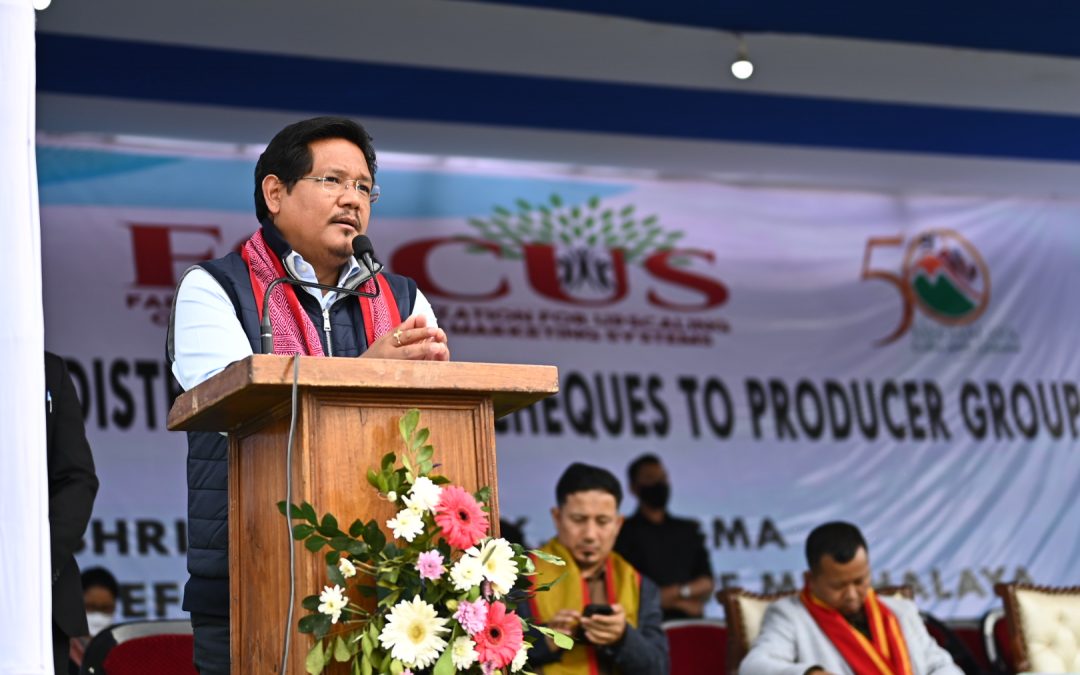 In an effort to reach out to rural areas of the State to popularise State Government’s flagship farmers welfare programme  – FOCUS, Chief Minister Conrad K. Sangma on Friday addressed FOCUS Programme at Dalu in West Garo Hills and at Dimapara in South Garo Hills.

At Dalu, Chief Minister distributed cheques worth ₹42.10 Lakhs to 50 Producer Groups. This make total disbursed of ₹1.62 Cr in Dalu Block. The intervention to provide financial assistance to different parts of the State through FOCUS programme is aimed to double farmers’ income.

At Dalu, he also disbursed ₹36 Lakhs to SHGs at the SHG Mela in the form of Community Investment Fund & Start Up Fund to women-led SHGs & Village Organisations of Dalu Block, West Garo Hills.

At Dimapara in South Garo Hills, he distributed cheques for financial assistance of ₹82.10 Lakhs to Producer Groups in Gasuapara Block, benefitting 147 farmers’ collectives through the FOCUS program.

Apprising the gathering of the FOCUS programme, the Chief Minister said that the flagship programme FOCUS is one of the biggest welfare programs in the Northeast where 4.50 lakh families amounting to 200 crores have been provided financial assistance post COVID.

“The last two years of COVID have been very difficult for everyone, more so for the farmers, through the FOCUS programme we have been able to support a lot of people,” he said.

Spelling out the features and implementation of the FOCUS programme he informed the gathering that the assistance is interest free and it is not a loan. He urged the gathering to form SHGs and producer groups to benefit from this scheme and various other missions, flagship programs and welfare schemes of the State government.

The Chief Minister distributed cheques worth 82.10 lakhs to 147 producer groups comprising of 1642 members during the programme at Dimapara.

Talking his mission further to connect with the people at the grass rot level and to sensitize the masses about various welfare and livelihood schemes and programs of the State government, the Chief Minister inaugurated the SHG Mela at Dalu and interacted with producer groups and farmers at the FOCUS meeting at Upper Bamonpara, Dalu.

Speaking to the gathering at Dalu, Chief Minister, Conrad K Sangma said that the programme is a multi departmental programme to sensitize the people especially the farming community about the different schemes in various departments of the government. Talking about the plights of the farmers of the State he said, “The farmers of the State are so impoverished that they cannot afford money even for the basic and small farming activities like buying seeds or transporting the products to the market,” and added that they also faced issues relating to storage, packaging, lack of market linkage and training to add value to their products.

During his visit to Dalu, Chief Minister also inaugurated the Krimkro PRIME Hub, Slaughter Unit & Meat Processing Unit. Through the interventions of PRIME Entrepreneurship Meghalaya Programme, the State Government is supporting the aspirations of entrepreneurs by giving them the opportunity to expand their horizons.

The Govt has collaborated with social organisation Bakdil to help entrepreneurs, particularly the youth to gain knowledge, skills & expertise to start & expand their ventures.

“The government is aware of the challenges and is trying to address these issues through initiatives like FOCUS and Prime Hubs,” the Chief Minister said.  He further added that through Prime Hubs the farmers, entrepreneurs, SHGs and the youth are imparted training, skill and knowledge in storing, packaging and marketing the products. “The government is contemplating on setting up at least fifty Prime Hubs across the State and these Prime Hubs also serve as Integrated Collection Centres for the farmers,” he informed.

Talking on the SHG Mela, the Chief Minister informed that in the past four years 40,000 SHGs with a membership of four lakh members have been formed. “Initiatives like the Prime Hub and FOCUS programme run on SHGs therefore the community’s participation is needed to drive and make these programs of the government successful along with the concerted effort of the officials and the NGOs,” he added.

Later the Chief Minister also visited the Dalu PHC and interacted with the Expectant Mothers. In his brief address, the Chief Minister said that the government is renovating, refurbishing and upgrading various health centers through funds from the World Bank and through the State’s own Budgetary allocation.

“The Dalu PHC definitely needs renovation and I assure you that the renovation of the PHC with the need for Staff Quarters and possibly the extension of the PHC building will be taken up on a priority basis,” he said. He further apprised the gathering on the Rescue Mission which focusses on abating the MMR and IMR in the State.

“The pregnant women especially the high risk expecting mothers are given special care, treatment and counselling by the doctors and ASHAs so that no precious lives are lost during the pregnancy and birth,” he said.

During his visit to Dalu, he also inspected the ongoing work of the Tura – Dalu road, which is funded by JICA with officials of NHIDCL.